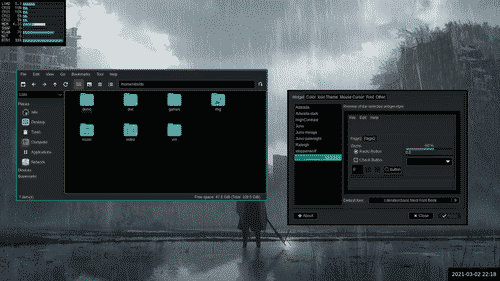 steppenwolf-dark is a general application/user interface theme based on OneStepBack by Jean-Pierre Bucciol, focusing on usability, minimalism, and a dark colorscheme with turquoise accents.

Originally, steppenwolf was developed as a theme to provide sleek menus, tooltips, and notifications in grey-on-black that lend well to alpha blending and the simple style I used in my openbox themes at the time, along with high visibility and low resource usage; I decided to take it into a dark-mode direction and now the theme takes inspiration from Matcha, although the code still inherits from OneStepBack.

This code inheritance is actually rather significant from a performance perspective. The code for the GTK theme is much lighter than most dark GTK themes. How much lighter? Well, the GTK-2 port of Matcha is approximately 2000 lines of code, while steppenwolf-dark is 400, and the GTK-3 port of Matcha is 10000 lines of code, with steppenwolf-dark clocking in at 1100. Similarly, the GTK-2 version of Arc is about 3000 lines, and the GTK-3 version is 4000 lines. I don't know about you, but I'd much rather parse 1100 or 400 lines of code than 10000 or 2000 to load my GTK applications, especially on older hardware.

There is also a Qt5 colorscheme intended for use with the Breeze style, which for the most part matches the aesthetic of the GTK theme. An additional colorscheme (pitch black, called steppenwolf-darker) is included in the distribution as well, for use as the colorscheme in the Kate editor.

These themes are my daily drivers, and should be usable out of the box -- they even come with an install script, which installs them per user or system-wide if installed as root. They run equally well on high-end or older hardware. For additional steez, try my konsole, alacritty, and urxvt terminal colorschemes, my tint2 theme (don't forget the scripts), and my urchin KWin theme.